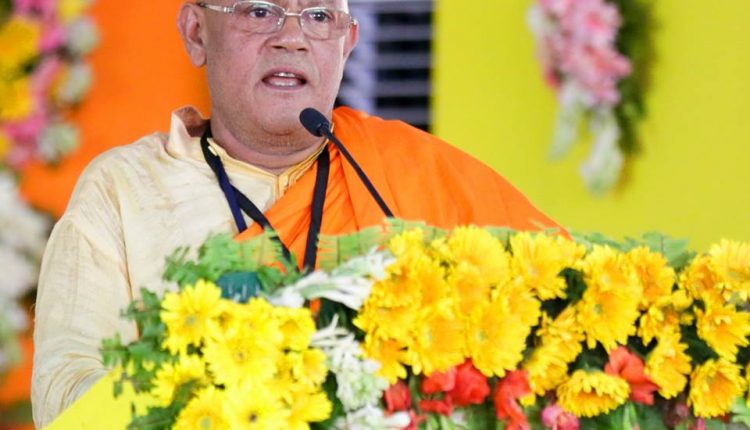 He was born on the 5th January 1950 in a remote village called BANAGALA in the southern Province of Sri Lanka. At the age of 17 he was ordained as a apupil Buddhist Monk [samanera] under the most Venerable Hedigalle Pannatissa Maha Nayaka Thera, then Chief Sangha Nayaka for India. He had his primary education in Sri Lanka and entered the Buddhist Missionary Service and training under the Mahabodhi Society from 1961. Had his secondary education at Mahabodhi Inter College,Varanasi,India. He was also awarded Bachelor of Arts and Master of Arts degrees for his higher studies from Indian Universities.

He received his higher ordination in 1970. He mastered the Japanese Language in Japan during 1976, obtained a diploma having followed a course in child education and specialized in the same subject. His dedication for child education opened the way to establish 14 kindergartens in Sri Lanka with the assistance of imminent personalities and Venerable Priests in Japan.

He established Lanka-Ji Buddhist temple and the Government of Japan, legally recognized it by vesting the status of Shukyo Hojin. Being the head of the Lanka-Ji he established the Japan Sri Lanka Buddhist and Cultural Centre. His noble services elevated him to be the Chief Head Priest for Sri Lanka in Japan. Further he was honored to be the Head Priest of Mahabodhi Aggra Srawaka Maha Vihara, where the holly relics of Sariputta and Moggallana Maha Thera’s (the Chief deciples of Buddha) kept.

He is also a member of the advisory council of Sri Lankan Tibetan Buddhist Brotherhood Society.