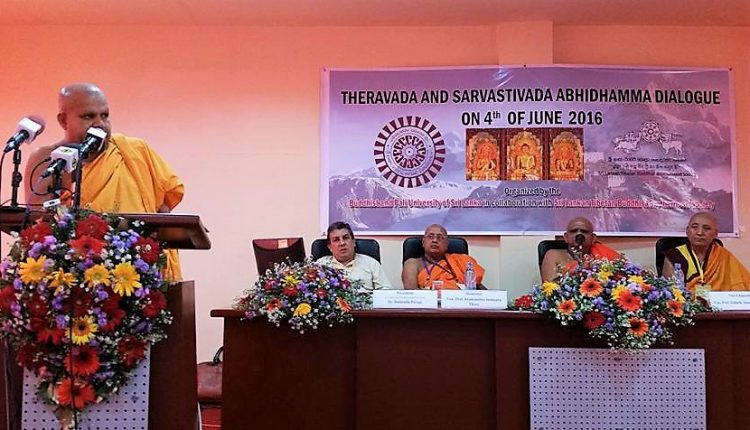 Theravada and Sarvastivada are two major Buddhist schools prevailing today that branched off from the main stream of early Buddhism. When the latest development of the two traditions is considered, Abhidhamma is only the factual teachings that can be authorized by them. Even though the two traditions authenticate the two separate Abhidhamma Pitaka, both the traditions have been developing it with reference to early Buddhism. When we read sharply the two canonical literature of Abhidhamma, we could find different interpretations and words that are not akin to the two traditions. Up to date, the scholars like McGovern, Stcherbatsky, and P.S. Jaini have paid their attention to find the relationship between Theravada and Sarvastivada Abhidhamma. However, this is one of the duties of the Buddhist scholars living today to examine the relation between the two major Ābhidhammic traditions.

Therefore, Foundation for Buddhist Brotherhood and Sri Lankan Tibetan Buddhist Brotherhood Society in collaboration with International Buddhist Confederation and Bhikshu University of Sri Lanka organize a conference on Abhidharma on 15/16 of June 2018. The plenary session would be chaired by the great scholars like Most Ven. Kuala Lumpur Dhammajothi Thero representing the Sarvāstivāda tradition and Professor Y. Karunadasa representing Theravada tradition. During the conference, the scholars in the field of Abhidhamma will present their papers showing the relation between the two.

Register for the Conference

Be a part of Sri Lanka Tibetan Brotherhood Society

Celebrating the Day of Miracles